THE HELL OF BREAKING INTO COMICS

Welcome to the not-so-very beginning. Breaking into the comics business is very hard. It’s so hard that I am starting to grasp what “very hard” actually means. Sexual innuendoes aside, I’ve decided to document the pathways I’m following to become a published comics writer. There are a lot of blogs by established writers that give advice on breaking through to the Big Show, as there are (pick a number) more of amateurs detailing what they’re doing to make it and promote themselves. Yes, I’d fall into that category as well but this blog is a very useful tool with many applications – the least of which is cathartic, the most is as a whetstone to sharpen my writing.

I was at my local comic store today to empty out my bin as I do every three months or so. The clerk handed back to me a copy of DIAL ZERO #1 & 2 (which I wrote & illustrated) saying he couldn’t sell them. I asked if he wanted them for free & he declined. I asked if he read them & he diplomatically sidestepped a negative answer by saying he “glanced at them.” Now he is the nicest guy in the world. I’ve known him and have been going to that store for 15 years, I’d say. It is not possible for me to have any animosity towards him or the owner at all. But I guess the episode left me a bit vulnerable, especially after the events of the last 24 hours.

I attended a one day convention in NYC yesterday. One of the promoters (Charles of BigCityDrinkandDraw.com) kindly offered us a table to cross promote our events. His was a monthly gathering he’s hoping to build called the Drink and Draw where comics people gather to booze up and sketch. Prizes would be given away and people can network which is a great idea. I was there with members of Pronto Comics, a collective of comics creators who self-publish to get our books into the public but mostly to send to editors of publishing companies to break into the business.

Now if you’ve ever attended a comic book convention you know it’s a brain draining experience. Whether you’re there to purchase items or meet professionals the physical effort is substantial – it’s a hassle to get there (trains, subways, parking, etc), you stand around a lot, crowds are overwhelming (to say nothing of the odors that meld into the available breathable air), the local food is terrible and there’s nowhere to sit. On the other side, if you have a table, the same applies except you have to extend a bubbly personality and outward enthusiasm to get people to come to you while explaining within 30 seconds why they should care about what you are offering. Unless you have limitless depths of energy (or a mutant healing ability), a convention can scramble your hopes into a thin liquid that quickly escapes through the coffee filter of your brain and through the drain of your soul.

That is when you have to decide whether to continue because brother, you’re just entering purgatory. Last night on the train ride home, the movie “Big Trouble in Little China” got into my head and the scene where one of the heroes mentions that the Chinese have a lot of Hells. So ladies and gentlemen, welcome to the HELL OF BREAKING INTO COMICS. If I could rename this blog that would be the title.

I’m going to use this space to detail my mistakes and triumphs (optimist that I am) but also for catharsis. I truly feel joy when I am writing. After the sixth hour at the convention all I wanted to do was work on script ideas.

I’d like to end on a positive note. As I was about to leave my comic book store I found in my bag a sketch I made at the Drink & Draw last night. I won 2nd place in a Ghost Rider sketching contest judged by Mark Teixeira (fantastic pro artist on Ghost Rider, Hex and others). Below is the sketch. A minor triumph but you take them wherever you can get them.

I’d tell you more but I got a deadline. Cheers! 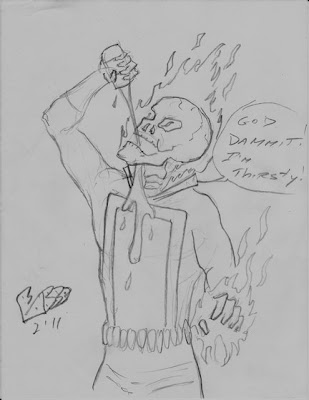