The Ghost of Divine & Baltimore Comic-Con

As a huge fan of John Waters’ films, I’ve always been fascinated by Baltimore. Doesn’t matter that “Multiple Maniacs” and “Pink Flamingos” were made in the early 70’s. My vision of downtown Baltimore was of a city of freaks and characters on every block and maybe, just maybe if I was high enough I’d see the ghost of Divine about to smack me in the face with a stolen raw steak. While no apparitions assaulted me the city did not disappoint.

But I’m getting ahead of myself. It was a last minute decision to venture to Maryland for the Baltimore Comic-Con. Many pros and fellow amateurs on the Comics Experience web boards had high opinions of the show. Not crazy crowded like New York Cons nor catering to other media, BCC was pure comics filled with pros from every stature of the business. Superstars like David Finch and Jason Aaron were side by side with the older guard like Herb Trimpe and Walt Simonson.

My interest in going was to meet publishers and network, possibly to give editors my pitch for a three issue mini-series. I researched the companies that would most likely be interested in a book like mine by seeing what they had printed of a similar vein. Off I went armed with character designs from my artist, copies of comics I had written to hand out and a bottle of scotch for courage. Highly recommended but coffee could substitute, I guess.

Five hours later I was at my hotel in Baltimore for a good night’s sleep but first I decided to walk around the city to seek out signs of the madness John Waters wrote about. The hotel valet advised me to walk to The Power Plant, an outdoor atrium of bars and drunk kids, but if I was into strippers Baltimore St was the place for me. Why skimp on the full tour? I checked out both.

The Power Plant was no different from any college town hangout. My TV Guide summery: “a place to drink & get laid.” Moving on to Baltimore St was a trip back in time to a pre-Disney Time Square filled with prostitutes, neon lights and pot-bellied men offering “free looks” at girls that will do “anything you want.” Considering the cop on horseback right across the street I’m sure that offer was limited.

While trekking around the city I played with my yo-yo – the Duncan kind. It was my executive stress ball which got me quite a few looks. Two couples walked passed me at one point. A girl said, “look at that.” Her date replied, “That’s the Yo-Yo Guy. I seen him around town.” I felt that Baltimore had incorporated me into its mythos, even if that dude had his facts wrong. It made me smile all the way back to my hotel room.

The next morning I entered the convention and made a beeline for the seven publishers on my list. Playing dumb I made the play that they probably wouldn’t be into my series but what would they suggest I do? The more we chatted the more they became interested until eventually some (not all) would ask to see my pitch. Three of the seven publishers succumbed to my Machiavellian plan. BHWA-HA-Ha-ha-ha!

After the con I met up with other members of the Comics Experience Workshop for dinner. (http://www.comicsexperience.com/index.html) It was great to finally meet up with other writers whose work I critiqued & who reciprocated. Then it was off to the Hyatt Bar where the Harvey Awards were taking place. It was here that I finished off my scotch flask and had to resort to…=gasp!=…buying drinks. But c’est la guerre! A fun time was had by all.

Back at the Con on Sunday I went shopping to pick up some back issues and try some new stuff including “God Hates Astronauts” (probably the craziest book you’ll ever read!), a huge “American Flagg” collection (by Howard Chaykin) and my favorite discovery in years: “AFRODISIAC!” by Jim Rugg & Brian Maruca. 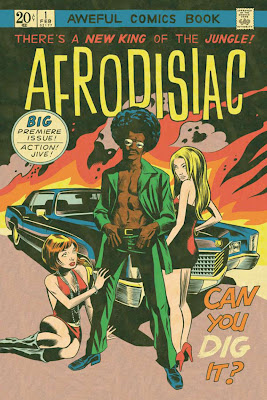 Afrodisiac is about a pimp whose origin changes with every story. His power, as far as I can tell, is he’s irresistible to women. Enemies include Richard Nixon, aliens, Dracula and God. It’s a wacked out blaxploitation-style book with amazing art and hysterical dialogue but it’s the art design that really hooked me. The stories look like old Silver & Bronze Age books that were photographed with careful attention to minor details like emulating cover designs of companies like Dell & Charlton. This is my choice for book of the decade!

On my way out I happened to notice a small old man sitting outside by himself smoking and eating a sandwich. It was José Luis Garcia-Lopez. To me he is DC. Not only has he drawn more characters there than probably every artist at the con combined but as the designer for DC’s licensing division in the 70’s his art has graced every product from lunch boxes to back packs to underroos. Odds are if you ever bought any DC non-comics item, it had images by JL Garcia-Lopez. I gently tapped his shoulder and told him what a big fan I was and then apologized for interrupting his lunch. He smiled and thanked me.

The drive back was a bit tough. Torrential downpours caused flash flooding in Baltimore and forced me to navigate around underpasses blocked by cars up to their windshields with water. But with Clive Barker’s Sacrament on tape to keep me company I made it home.

Baltimore Comic-Con was a delight and a significant milestone in my fledgling comics career. While nothing may come of the publishers’ interest in my book, I feel like I’m starting to understand the business. But right now all this talk about Baltimore makes me nostalgic for a John Waters movie tonight. How about Multiple Maniacs….