This blog post is brought to you by eleven cups of diner coffee. I counted.

Baltimore Comic Con usually wipes me out but with New York following only a few days later I was hit with a double whammy of exhaustion. And it doesn’t help to skip meals, my fellow creators. One evening I realized that after mingling with other comics fans, I only had scotch for diner. At 2am I tried to remedy that fact but options are limited in Baltimore. 7-11 fried chicken ain’t bad in the middle of the night. During daylight hours…I can’t say.

But I’m getting ahead of myself.

This is the eighth year I’ve attended Baltimore Comic Con – seventh vending. It’s my favorite convention because of its emphasis on comic books. Not pop culture celebs or wrestlers but the printed book. It’s the fans themselves that are the highlight for me. Lots of smiles and enthusiasm abound in the halls. If you ever need a pick-me-up of positive vibes, BCC is the place for you.

This year I had all four issues of my World War 2 book THE MOSES MILITIA available. Was hoping to have issue five ready but time was against us. Producing comics is a long process of writing, drawing, coloring, and lettering amidst constant editing to maintain a level of quality from issue to issue. The results are always there in artist Bill Wylie’s pages and number five is already shaping up to be the best issue yet.

In the meantime, my new series THE PUNCH LINER made its debut at the con. The book is an homage to the 1970s TV series Kolchak The Night Stalker. It features stand-up comedian Stan Douglas who has strange encounters in his travels on the road yet he can’t explain why. I gave numerous copies to publishers at the con, all of whom remarked on the quality of the book. Artist Luca Cicchitti has a definite feel for this mix of horror and comedy and rocked the pages! Not just the characters but in maintaining an air of creepiness in his backgrounds. Looking forward to issue two. 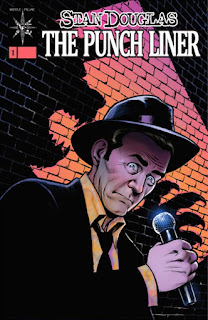 The cover by Russ Braun (The Boys, Jimmy’s Bastards) captured the exact feel I wanted  for the book. When I wrote the script I always had Russ in mind for the cover knowing that he was a huge Kolchak and monster fan. At New York I presented him with a printed copy and we all chatted about how much we loved the TV show.

Felix Serrano provided amazing colors for the cover and it’s a joy discovering it was the first time he worked on Russ’ art. Matter of fact they had met for the first time at the New York Con. Hopefully we can do it all again!

Back to Baltimore. The books sold quite well as people came over to pick up the latest issue of Moses Militia and scoop up The Punch Liner. In addition to the fans, it was a delight to run into other creators and reacquaint relationships - Justin Jordan, Amy Chu,
Sean Von Gorman, Gannon Beck, Daniel Kalban, etc. Unfortunately since I didn’t have any side help to run the table it was difficult to saunter around the con and chat. Hopefully next year I’ll have some help, either human or robotic. Doesn’t matter.

A pure joy is also meeting professionals whose work you’ve enjoying for years. Tony Isabella (creator of Black Lightning) was as nice as he comes across on social media which is how he knew me. Mind blown! I hope he continues to attend conventions in the future.

The same goes for legend Howard Chaykin (American Flagg, Cody Starbuck, etc). We had a wonderful conversation about Robert Crumb, mutual friends in common, and writing but don’t bring up Harlan Ellison to him! I learned that. To put it mildly, Howard’s not a fan. I changed that subject quickly by offering him issues one and four of The Moses Militia. He liked the concept and gladly took the books as did Tony Isabella earlier.
Some quick observations – cosplayers are always a bubbling fountain of joy. I took about 340 pictures of different characters and while for women Harley Quinn still reigns supreme as the most common costume, for males it’s pretty clear that Negan from The Walking Dead has toppled Deadpool for sheer numbers. And why not? All you need is a black jacket, a whiffle ball bat (not even with barbed wire), and a sharpie to draw in a porn mustache. I saw it there.
https://www.facebook.com/jamesbabbo/media_set?set=a.10156026034523095&type=3
My hotel room was again quite affordable (meaning cheap) but I could’ve done without the blood stains on the light switch. I didn’t check that box on Expedia. 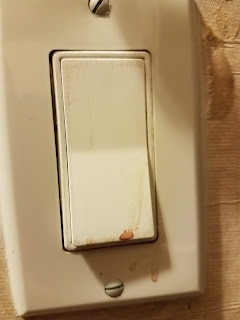 Saturday night is typically when creators hit the bar at the Hyatt Regency to let their hair down. This year though I didn’t run into many people that I knew so I intended to make it an early night. To pass the time, I started drawing superhero stick figures on post-it notes while drinking. Before I realized it, I had the table covered. That drew a few women over who asked to have them (not bragging – that’s what happened, readers!). That turned into hours of discussing comics, movies, and scotch. Before I knew it, 2am creeped up and I had to leave for convenience store fried chicken and sleep. 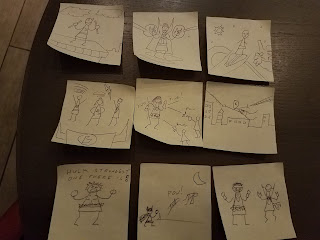 That next week I attended New York Comic Con (tables are too expensive). The day started with racking up some karma points. A waitress at a local NYC café couldn’t raise the metal gates of the shop – the heavy chain was pretty rusted. I assisted by putting all my weight on it as I pulled. Took a few minutes but the gates went up. She was so thankful that she offered me lunch. I just asked to wash the rust off my palms. When I came out of the rest room, she insisted that I have coffee and cake. A yummy way to start the life-draining exercise of NYCC! 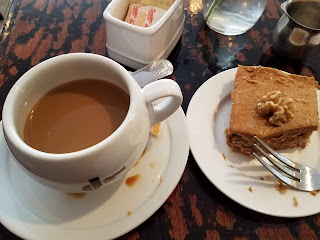 As mentioned above, it was fun to see Russ Braun and Felix Serrano (who produced the cover to THE PUNCH LINER) as well as Chris Sotomayor, Brian Smith, Ed McGuinness, Shawn Martinborough  and others. But I have to single out writer Dirk Manning (Tales of Mr Rhee) who posted a video eulogy praising Harlan Ellison after he passed. It was because of that, I had purchased a collection of Ellison’s short stories having only read his comics’ and TV work. I’m really enjoying the book (but again, don’t mention it to Howard Chaykin).

Lastly, I have to mention running into an amazing cosplayer of Ultraman. The suit looked exactly like the TV superhero – rubber with various light-up FX. When I showed him a photo of a Gamera costume I built back in 1996, he whispered in my ear, “I want to fight you.” LOL! 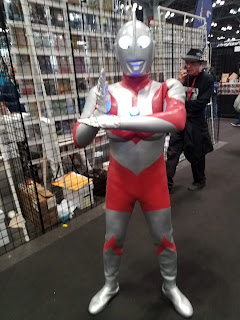 I could go on (the new Dr Who debut, my quest for the Super Powers Mister Miracle, Garth Ennis passing me while I read a Chinese menu in Baltimore) but I need to color pages for The Moses Militia. See you in the comics shop!