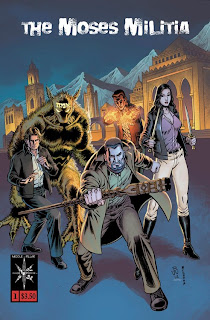 This was my second year attending Baltimore Comic-Con but my first with a table. I had two goals: 1) to promote word of & interest publishers in my book THE MOSES MILITIA and 2) to establish myself as a professional colorist.

Both seemed to have a good start off the diving board into the deep end of the pro comic book world. All the publishers I handed packages to accepted graciously even though I gave them the out of mailing it to them. No one likes to be bogged down with materials they don't want. So on that end, I'm hopeful.
It was great to see numerous professionals that I can now count as friends (they know my name!) as well as others that recognize me from other cons as a true fan.

Copies of my book went to Jamal Igle, Mark Wheatley, Mike Raicht, and Garth Ennis as well as a bunch that sold at the table. It was great to hand a copy to Chris Sotomayor who did an oustanding job coloring the cover.

THE MOSES MILITIA, in a nutshell, is a World War 2 story set in Casablanca (which may or may not take place within the same world as the 1942 film. =wink!=). A small group of Jewish resistance fighters have been sent on the hush-hush from British Intelligence to find out why the Gestapo are meeting up with a German alchemist in Morocco. It's a three-issue series that I will self-publish if no one bites on the publishing end.
Words & interior colors from me, pencils by Bill Wylie (Secret Defenders, Web of Spider-Man), cover inks by Mark McKenna - it's a project I'm very proud of. Anyone interested can LIKE the facebook page for news & info: https://www.facebook.com/MosesMilitia 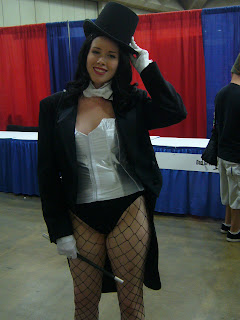 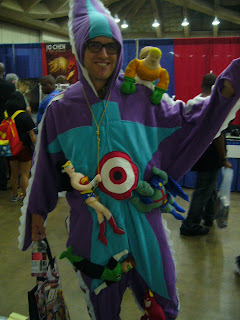 Cons also have tons of cosplay and yes, lots of hot scantily-clad chicks (you can see a bunch of pics on the facebook page) but I have to mention this great STARRO costume which depicts the famous JLA cover. Really cool!

After Saturday's events, I met up with other members of COMICS EXPERIENCE (a workshop of creators/pros with numerous educational courses on-line) for drinks. It was wonderful to share booze with such an enthusiastic crowd of talented creators.

Lastly, the city itself is a lot of fun. I always have a great time in Baltimore. My girlfriend and I had sushi along the harbor and talked about coming back just for the hell of it.

Looking forward to next year's comic-con!
- jb
Posted by James Babbo at 12:17 PM