Hi monster geeks!
Some of you may have seen my November 25th appearance on the cable show "Comic Book Men" on AMC. This caught a lot of my friends off-guard as I did not promote this on social media or even tell anyone on the phone. That was due to legal concerns which I will get into. But let's start at the beginning.... 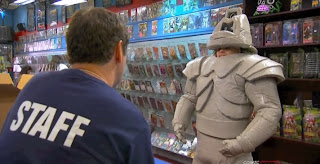 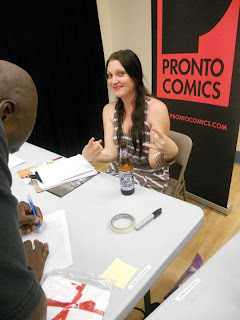 There is a NYC collective of comic book creators called Pronto Comics (www.prontocomics.com). Last July at their fundraiser, a casting producer from AMC (Kiki - pictured) asked if anyone wanted to be on the show. A few tequila shots later, I signed up not thinking anything would come of it.

A few weeks later I was contacted by the show to fill out a rather long questionnaire. At this point I wasn't really interested because I was knee deep in getting the first issue of my comic book, THE MOSES MILITIA, ready for print. That and the appearance criteria were to bring an item to the show to sell.

Well, I didn't want to bring any rare comics or toys. That happens on a weekly basis on the show. Then it occurred to me...I have a body in the basement! And by that I mean, my Mecha-Kong costume that I had built for G-Fest - the annual Godzilla convention in Chicago.

For those that are not aware of the character, Mecha-Kong was the robot nemesis in the 1967 film "King Kong Escapes." The costume is built of carpet foam and latex rubber, very lightweight and easy to wear. The main reason why I built this particular suit was because one of the stars of the film, Akira Takarada, was appearing at G-Fest that year. Here I am posing with him and my girlfriend who dressed as Madame X, the mysterious gov't agent who commissioned the building of the robot in the film. 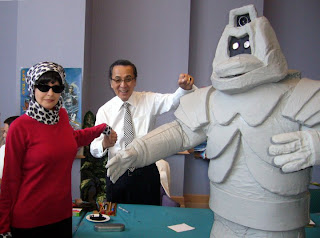 So I sent pictures of the suit to the casting producers and they contacted me a week later. They conducted an on-line interview through Skype and asked me all about the suit, G-Fest and my nerd credentials. I must have passed that because a few days after I was told I would be on the show.

So in early August, with the suit in tow, I had driven down to Kevin Smith's store, the Secret Stash, in Red Bank, NJ. The entire crew were very cool. The atmosphere on the set was very laid back. They shot lots of footage of me in the costume walking down the street towards the store. 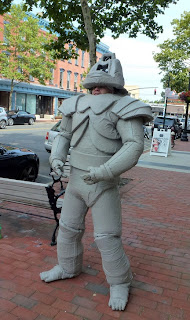 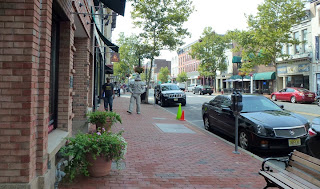 Traffic slowed down, people stared, salespeople in stores gawked through their windows. Seeing the reactions the suit caused, the director asked a lot of those people to reenact their surprised looks. All of this was filmed. 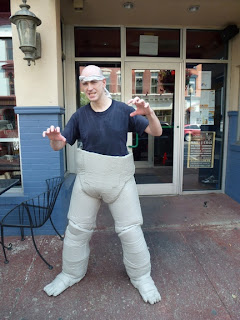 Now I must point out that while the suit is very lightweight and the head easily tips back so I could get as much air as I needed, I was walking down a street in mid day in August wearing a carpet. I was steaming inside. Luckily I was wearing a sweatband on my forehead - essential equipment for anyone wearing a monster suit. We spent about two hours on the street before they were ready to film me inside the store.

Once they called "action!," the filming went pretty much as was seen on TV but a lot was on the cutting floor - more discussion of Godzilla, “King Kong Escapes,” the suits I had built, G-Fest, that I actually had a girlfriend, etc. And also two versions of the transaction were shot: the TV scene where they turned down buying the suit and another where they offered me a lower price which I had turned down. Furthermore, there was a scene where I asked if they would take the suit on consignment and sell it there which they accepted. The suit is now on display at The Secret Stash for viewing or for sale (at least for a few weeks).  Or anyone can contact me directly. 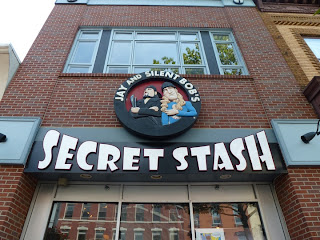 Also, a professional photographer took shots of me in the suit for promotional purposes. (pictured) 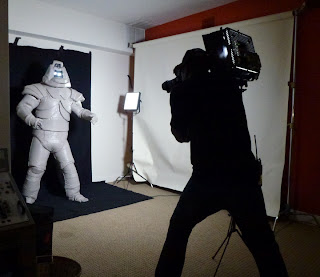 The cast themselves were very nice, especially Walt who seemed to have a real enthusiasm for Godzilla films and the genre in general.

Lastly, the store also gladly accepted copies of my comic in their store. So look for MOSES MILITIA #1 at The Secret Stash!

Now after the shoot was over, the producers informed me that I could not promote my appearance on any social media. They do check and would consider a posting on facebook or twitter as a breach of contract and pull my segment. So therefore I couldn't tell anyone.

I was told that a sneak peek of Mecha-Kong was shown at New York Comic-Con but I didn't see it. The producers did contact me the week before to let me know the show would air on November 25th.

When the show aired, the six hour shoot was condensed to a five minute segment - me walking in, explaining what Mecha-Kong & G-Fest was, the cast asking me to smash a cardboard city and then turning down purchase. The reaction to the appearance has been uniformly positive. A lot of my friends posted on social media about the show and put up screen shots. One isolated the segment and posted it in its entirety (thanks Dutch!) which will probably be taken down but here's the link:
https://www.facebook.com/photo.php?v=297472457039057 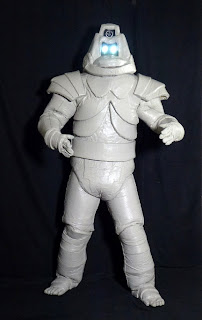 There's a possibility that more footage will be included when the season 2 DVD of Comic Book Men is released. I have no idea.

All in all, it was a fun experience. I had a great time, the suit got some air-time, and I'd like to think I contributed a little to Godzilla/Kaiju fandom.

See ya at G-Fest XX!