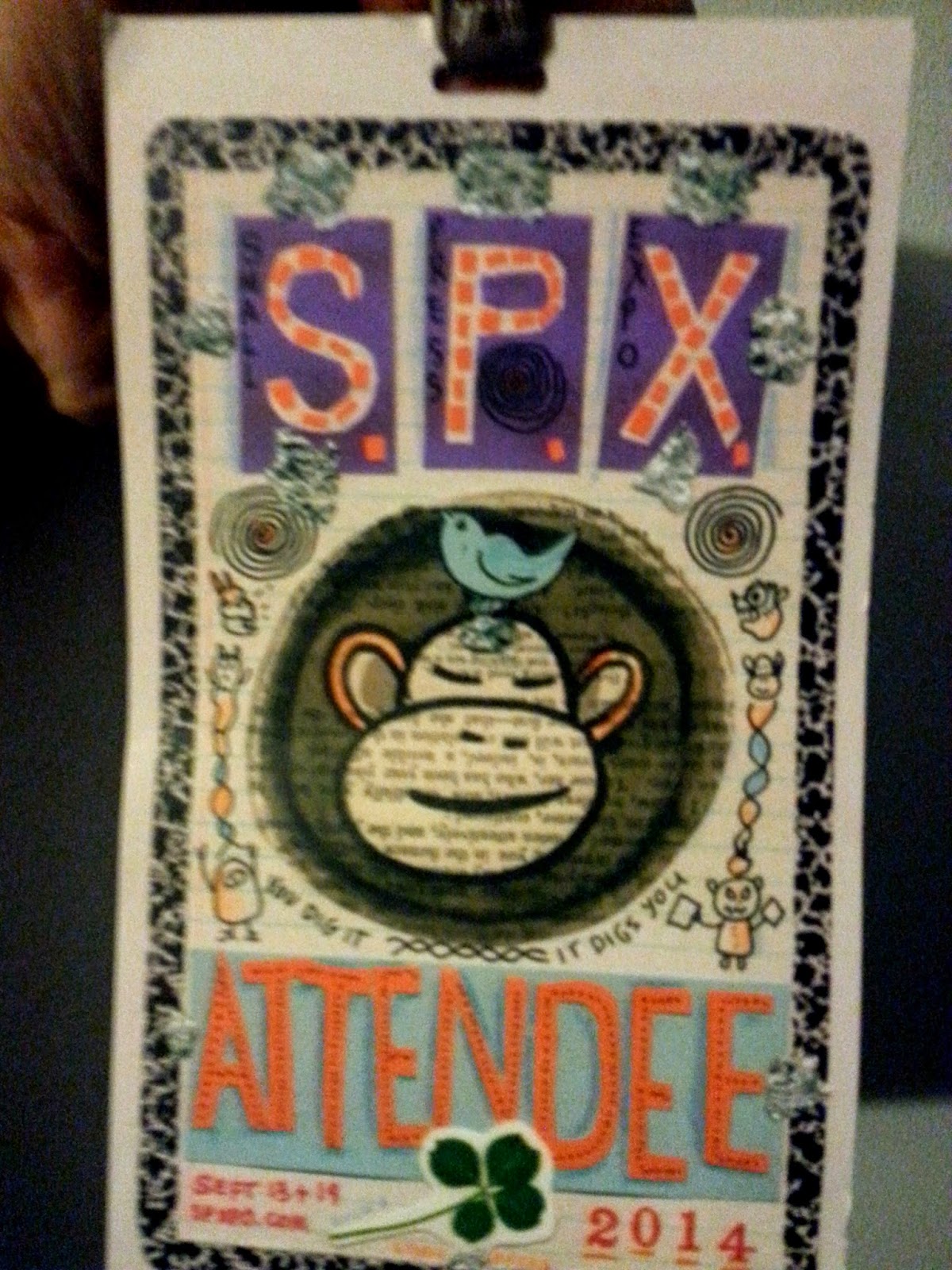 The past four years I’ve attended or booked a table at the Baltimore Comic Convention. For this year’s BCC, I planned on debuting a new comic book but alas, it didn’t happen due to missed deadlines by the artist. (If only I kept up with my drawing instead of fronting a punk band for 7 years...but I digress.)

So I decided to attend the Small Press Expo (or SPX) in Bethedsa, Maryland which caters to purely independent comics. The main reason I went to SPX was to find a replacement artist but it became clear to me that everyone there is doing their own thing. And that’s awesome! It’s great to see creators working their dreams instead of worn down artists pushing out content when they have no proverbial “horse in that race.”

That first day I wandered, navigating up and down long aisles checking out art styles to see who would fit my project. The optimism and pride in everyone’s eyes as they described their books was infectious. I picked up quite a few of them. Here’s some quickie reviews: 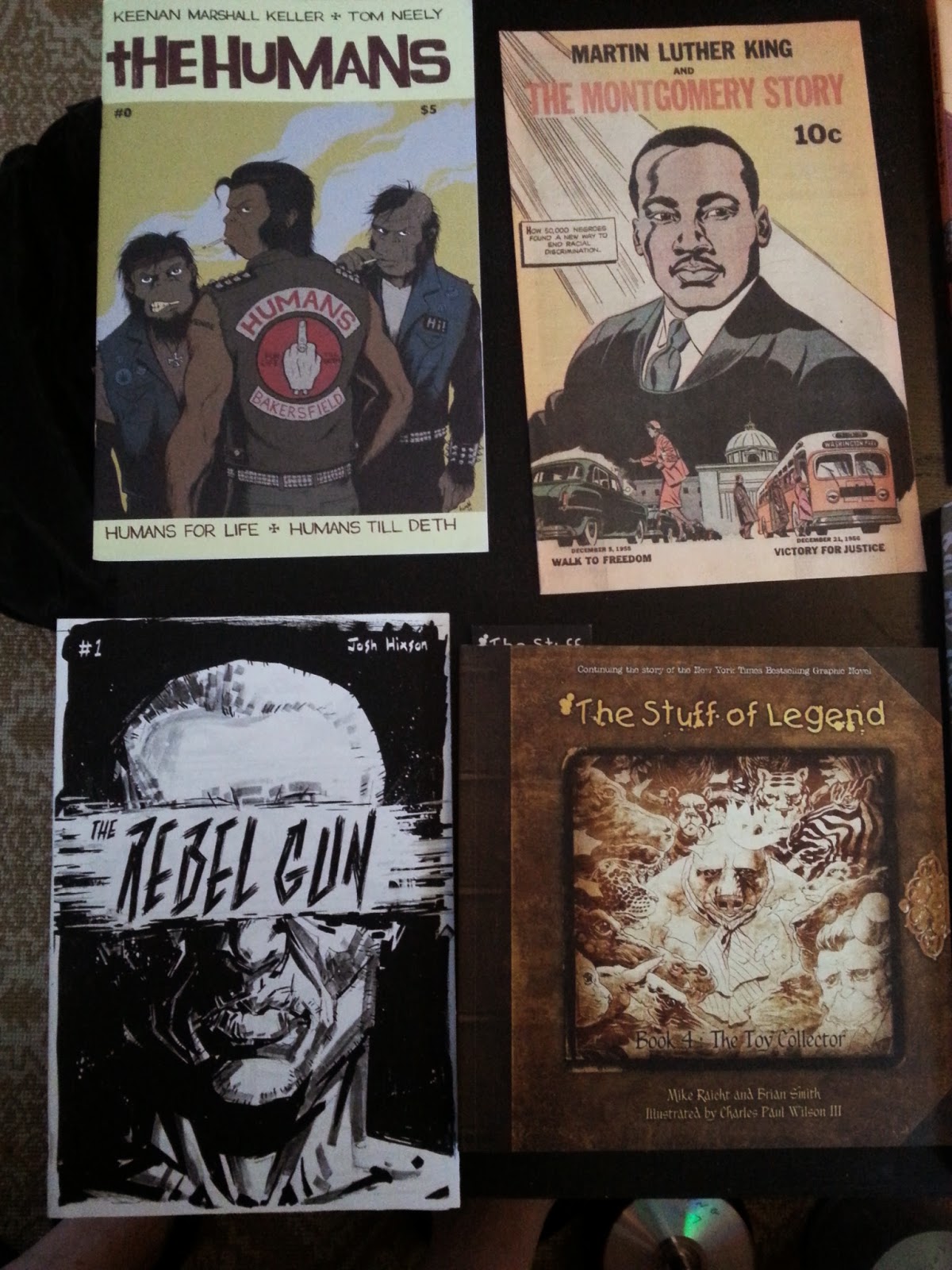 First off, I made a beeline for Th3rd World’s table to get volume four of “The Stuff of Legend” which I highly recommend. A great story about a boy kidnapped by the boogeyman and his toys come to his rescue.

My favorite book last year was the blaxploitation parody “Afrodisiac” from ADHouse which blew me away so it was a great surprise to meet one of the creators, Jim Rugg, and pick up another of his books, “Street Angel.” We had a fun chat about his stuff as well as diverse topics such as Power Man/Iron Fist and Black Dynamite which we both were fans of.

“The Humans” is a cool book about what appears to be a Pierre Boule planet where apes rule and features an ape bike gang who rumbles with a rival outfit. Nice art and storytelling. I’ll pick up more when it comes out through Image.

Crime books are my thing so I had to pick up “Rebel Gun” by Josh Hixson. Phenomenal art! A low budget film with a real life serial killer is the plot of “The Auteur,” a wacked out book that would make a great animated film if Ralph Bakshi got a hold of it. “Bunny Girl” is an adorable book about the creator’s one year old. 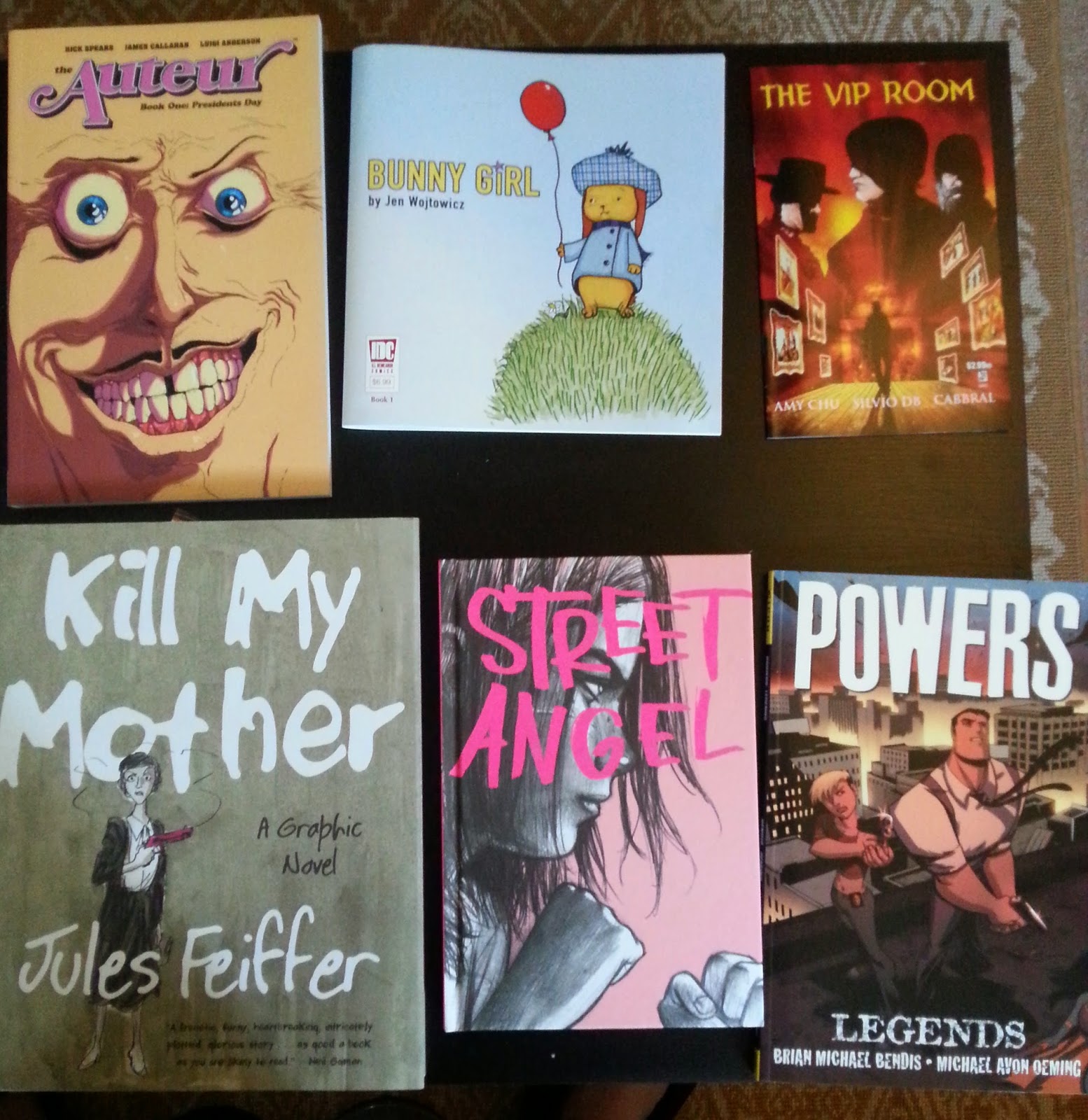 Every time I see writer Amy Chu, I always pick up what ever book she has. Never disappoints and “VIP Room” is no exception. Keep your eye on her.

On the second day, I had two goals in mind. One was to meet up a rep from ComiXology. They had sent a group email to participants of their Submit program which I was (MOSES MILITIA available now!) asking if they were attending. If they were to approach them and say hello. Easier said than done because ComiXology did not have a table nor did I know what they looked like. Well, I had asked a SPX staff member and they told me it was probably Chip Mosher. When I asked what he looked like, he said and I quote, “He’s a tall guy with a beard.” ???? Have you been to a Comic Con full of millennial hipsters? They’re all tall guys with beards!!!

My second goal was to grab a coffee and find a couch in the catacombs of the hotel where I can write on my laptop for the next “Moses Militia” arc. The creative energy of the con was a battery I decided to plug into while it was peaking. As I got a few pages in, people starting filling up the area. On my left I noticed there was a whole breakfast set-up of coffee, juice, bagels and pastries. And yep, they were free! Tumblr had sponsored a networking meet-up for con attendees. Not only did they bring munchies but there was a box of free trades they were giving away. (Grabbed me a trade of “Powers” by Bendis and Oeming!)

So I placed my script on pause, had some eats and mingled. Met a lot of (again) cool people and managed to meet a few promising artists.

Now here I must mention two incidents with comics professionals – one negative one positive. Since I don’t believe in posting negative comments about pros, the negative story will be about a “nameless anonymous guy/gal.” So I approached NAG to ask a simple question about submitting my book, “The Moses Militia,” for review to this person’s site. The query was “should I wait until it is gathered into a trade before I send it in?” NAG immediately went into some diatribe about genres that had nothing to do with what I had asked. When it was clear that NAG wanted to let off steam about…whatever, I decided to cut it short and gave this person a postcard with the cover of my book so this person would be familiar with it when I sent it in. Well, for some reason NAG rolled his/her eyes at the site of the card and said with a sarcastic tone, “Oh great. Moses Militia” before walking off. I have no idea what that was about. I knew this person was anti-superhero (which was part of NAG’s rant) but MM is not that. Maybe because the image is professional looking and features heroic poses (gee, sorry it looks good!) that’s the impression NAG got? Who knows. I like the next story better…
So I made another sweep of the Con to talk to a few more potential artists when I was sure I found the right person. Her portfolio which was open on her table was very impressive. I decided to make my pitch and dazzle her with a money offer. Now where I made my mistake was failing to look at her name tag or the 7 foot tall standing banner behind her or the many trades on the table with her name plainly in sight. Hell, why bother with details? I’m gonna hire her! After a brief discussion she politely turned me down. That’s when I looked around and found out that I tried to hire Carla Speed McNeil for a pittance of her regular page rate. And believe me, what I offered her was a fraction of what she gets. Admittedly I was unfamiliar with her work but I did know her name. So I quickly apologized which she replied there was no need. Nope, I embarrassed myself and insisted that I felt an apology was in order. I should mention she liked what I was pitching, which centered around a female character (a point she admired) and thought the rate I was offering was great for newcomers to the field. Very gracious. Very professional. Looking forward to meeting up with her again.

Later in the day I attended a Q&A panel by Jules Feiffer who discussed many legendary cartoonists including Milton Caniff and Will Eisner. Soon after I managed to meet up with him and picked up a personalized copy of his graphic novel “Kill My Mother.” 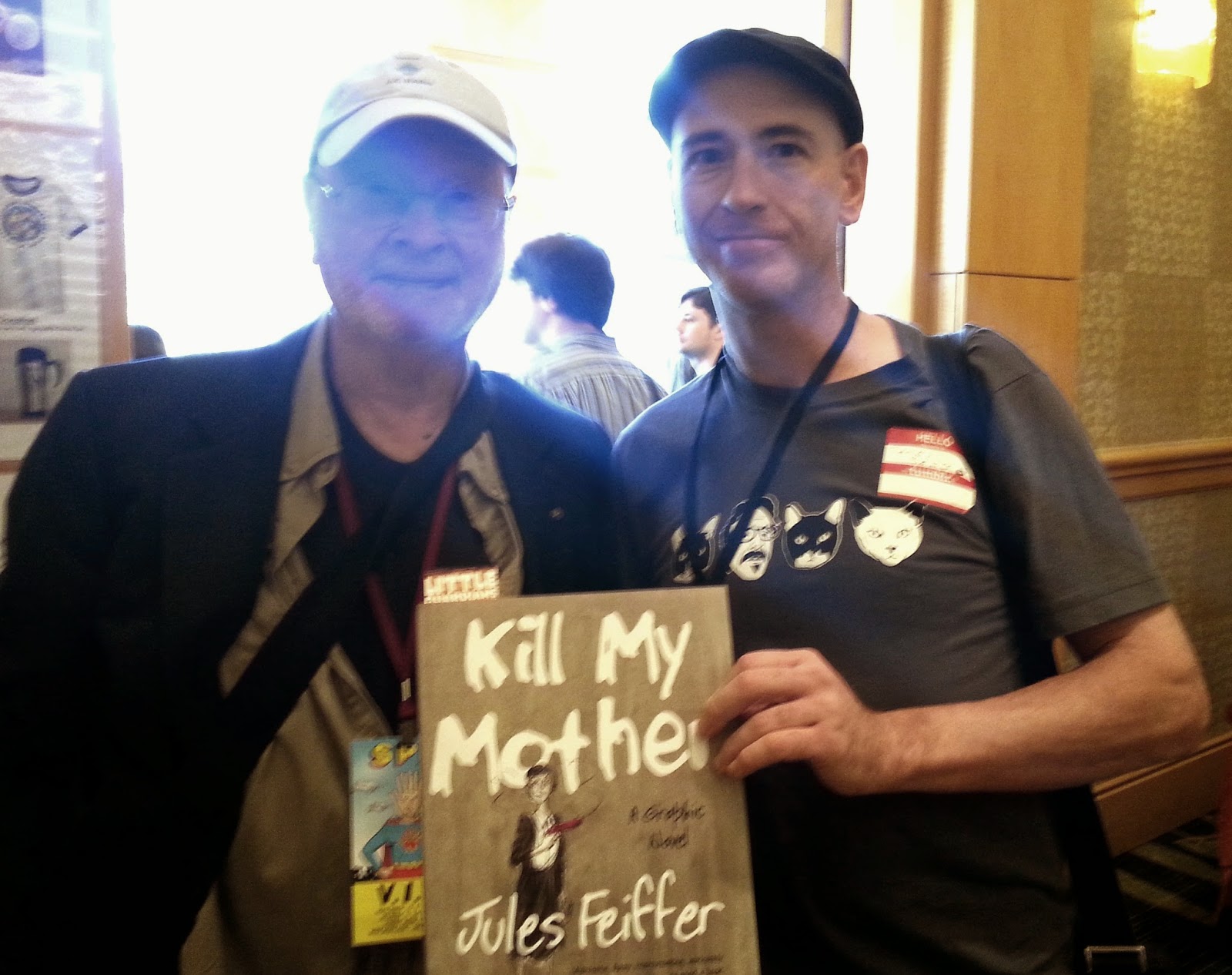 As I turned to exit the con, a tall bearded man passed by. Could it be the elusive Chip Mosher of ComiXology? I tapped him on the shoulder and indeed discovered it was him. When I told him the description I was going on, we both laughed. Another really nice guy.

So I am now a fan of SPX and will most likely attend it next year if not book a table myself. Now I’ve got a lot of reading to do….