Sorry! This late entry is on attending Baltimore Comic Con last September 2015. As the fourth time I’ve booked a table at the Convention Center, BCC is always a joy to attend because it's purely focused on comics rather than general pop culture. And this year I was very excited because I was debuting my newest book, GOLDENGIRL #1! 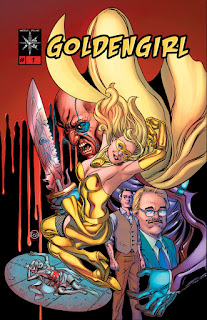 GOLDENGIRL was an idea that formed when I was part of the New York City creator collective known as Pronto Comics. As a group, we pooled our resources to put out quality material and one of the books was an anthology called KICKED. The idea (brilliantly conceived by writer Joe Toledo) was about an intervention for a superhero sidekick by former partners of the same hero, Captain Awesome. Each chapter was a bleak anecdote of how the square-jawed hero screwed over his juniors.

My contribution was called Loser Boy, a “hero” who was passed over to join Captain Awesome for the talented (and much cuter) GoldenGirl. She just had a cameo in that tale but she grew on me. So I crafted a story that grew into a 48 page tale of greed, ageism, and sexism.

Part of my motivation was to see if I could write a female hero under certain parameters.
1) to ensure she didn’t require any help or needed rescuing by males.
2) to explore themes unique to a female hero – her looks, age, whether she would be taken seriously by a male corporate society.
3) to apply the Bechdel test.

For anyone not familiar with the Bechdel test, it’s a set of guidelines (associated with cartoonist Alison Bechdel) usually applied to films to determine if any attempt was made to make the female characters three dimensional and not a stereotype.

Those guidelines are:
1) Does the story have at least two women in it.
2) Do they talk to each other
3) And is the subject about something other than a man.

Using all that, I crafted “The Death of GoldenGirl” about how a corporate sponsored hero suddenly became yesterday’s news due to her turning thirty. In a youth oriented society and a lack of roles for older actresses, why wouldn’t that apply to superheroes? So in the plot a promotional representative comes up with a scheme to get GoldenGirl back into the spotlight with tragic consequences.

This story had a few false starts with at least three artists unable to finish the project due to other commitments. So I put a call out to artists on various sites that connect talent. I received at least 100 submissions but settled on the talented Julian Taveras who I thought lived in The Bronx. For that reason I thought he was local enough that we could meet in person to discuss the project. After he signed on, I discovered he was living in Ohio! We wouldn’t meet in person for a year but I’ll get to that later.

Around the time the pages started coming in from Julian, DC (and Supergirl) artist Jamal Igle was running a kickstarter project for his independent book, MOLLY DANGER. One of the incentives was a cover drawn by him which I signed up for whole-heartedly. The finished cover far exceeded my expectations. And with color from the amazing Chris Sotomayor, you can see the result.

While I worked many sleepless nights to color the interior 48 pages, I quickly realized that I wouldn’t have the time to letter it so I turned to the incredible Dave Sharpe. He saved the project by getting it finished on time and adding a professional sheen to the balloons and captions. Never underestimate good lettering, people. That saying should be in fortune cookies.

So books in tow, I got to my hotel in Baltimore. In the middle of the night there was a knock at the door. It was Julian Taveras who had taken a bus from Ohio to Baltimore to do sketches at the table and sign books. There was many a celebratory toast made that weekend, a drink for the book, a drink for comics, follow by drinks for no reason!

Highlights from the convention:  I picked up the original art for the cover from Jamal Igle. I’ve known Jamal for a few years now having met in the hotel bar at a previous BCC and trading silly DJ stories. Again, amazing cover! 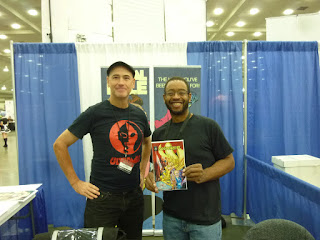 Picking up some original art from the incredible Jose Luis Garcia-Lopez - a drawing of Mr Freeze from the Batman TV series (the Otto Preminger version). Still have to frame that piece. 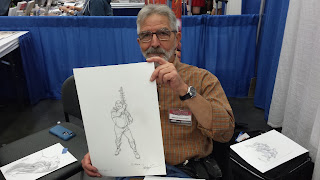 Meeting Neal Adams and telling him how my 1st comic was Detective #410 by him and Dennis O’Neill. He graciously posed for a pic holding up the cover of GOLDENGIRL. 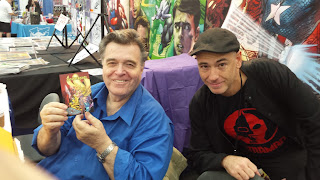 Meeting colorist Laura Martin who I had spoken to during the online coloring courses I had taken under Chris Sotomayor (sign up at Comics Experience’s website!). She had taken a few moments to give me valuable feedback (pro & con) of my coloring on GoldenGirl. Can’t thank her enough.

GOLDENGIRL sold well as well as my World War 2 series THE MOSES MILITIA making for another enjoyable Baltimore con. Seeing those two books on the table gave me pause and think, “Hmm…I’m not just saying I want to make comics. I’m doing it!” That’s another free fortune cookie saying from me to you!