As an indie comics creator there’s not a lot of spare time to do anything. If I have a free moment, my first impulse is to start sketching or writing my next plot. Vacation isn’t a word in my pocket dictionary. So that’s one reason (among many) that I look forward to Baltimore Comic Con. It’s my favorite show because it’s purely comics based. No wrestlers or celebrities here. Although they had a couple, it was not the focus.

So this was my sixth time attending and/or vending in Artist Alley with my comics, THE MOSES MILITIA and GOLDENGIRL. Yes, it’s exhausting to stand for eight hours but when you’re pushing lemonade (which you sincerely believe is the best on the block) then it’s exhilarating! 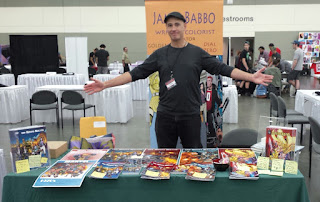 What made this Con especially exhausting, it was the first that I didn’t have a helper/assistant to allow me time to saunter around the place. That said I did find the opportunity to say hi to a few friends (Brian Smith, Amy Chu, etc.) and meet a few that I’ve only known virtually on social media (Dirk Manning, Justin Jordan, etc.).

There’s also the fun of meeting other indie creators who share in the joy of making comics. Some of the books I picked up were Space Corps, My Gal the Zombie, Primal Instinct, Zachariah Thorn, and Tales of Mr Rhee volume 1 by Dirk Manning. After I’m done writing this blog entry, I’ll be reading these over a well-deserved espresso! 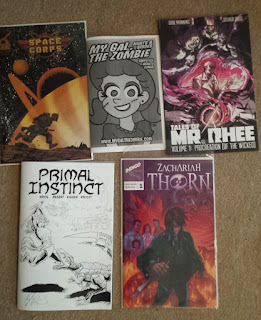 Friday night dinner was especially memorable because I wandered into Ten Ten Ramen, a Japanese restaurant. I immediately felt comfortable for three reasons: the animated “Howl’s Moving Castle” was playing on the TV screens, Massive Attack’s “Teardop” (aka the theme from the TV show House) was playing over the speakers, and a Godzilla figure stared at me while I ate. I was at home! 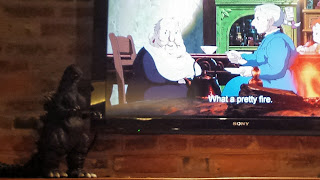 Saturday evening usually means drinks at the Hyatt hotel bar after the Harvey Awards. Creators, retailers, and fans can mingle and chat over booze. Had a lot of fun meeting people from Source Point Press and Devil’s Due. Super nice gals and guys!

Over the course of the weekend, I always take pics of cosplayers. You can find the folder here at my Facebook page (http://tinyurl.com/zv6mdqn). Friday seemed to have a plethora of Deadpools everywhere but overall the Con was swarming with Harleys of every category: Suicide Squad, video game, original Bruce Timm, etc. There were so many bumping into each other that my fellow vendors and I were discussing a Thunderdome event where all the Harleys would enter, battle to the death, and “only one would leave!” But they were so cute, soft and squishy, that they probably couldn’t do it. Then we speculated that they could use the huge hammer props as weapons. Ah, but they were also thin – made of paper and Styrofoam. Then we came up with the idea of using the handles to plunge into the eye sockets of their targets. Things got darker after that so we dropped the conversation. 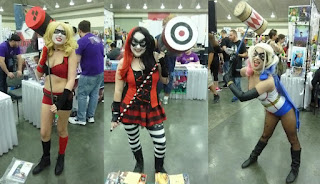 My books sold well, as they did at EternalCon on Long Island a few months earlier. It was there that I completely sold out of MOSES MILITIA and had to go back to print. Luckily I picked up a fresh run just two days before traveling to Baltimore. Was in full panic mode before then. And lo and behold, MOSES has fans! I had multiple people who had the prior issues asking for the next. They’re coming, faithful readers! The incredible Bill Wylie is hard at work drawing the next story arc which will be available soon.

There were constant compliments on the art of the series. Passersby would stop in their tracks as they glanced at the prints we made of the covers of the book. I could’ve made a montage of all the wonderful comments on Bill’s work. 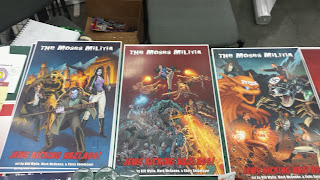 And yes, I made prints of all the covers including GOLDENGIRL with art by Jamal Igle and colored by Chris Sotomayer. Those stunning images were like screaming billboards that drew everyone in and sold books on their own without pitches from me. Should’ve made them a long time ago. 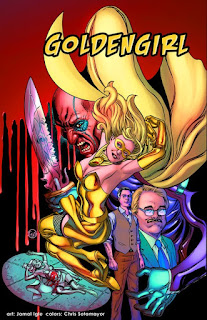 My minor quibbles. The one issue that I, and several others had, was the lack of a wireless signal at the con. Hope that gets rectified in the future. Also on Saturday some moron decided to pull the fire alarm causing everyone to evacuate the Con in the last hour. Other than that BCC was a blast!

Sunday brought me an unexpected thrill when I met Howard Chaykin, a longtime hero of mine (American Flagg, Cody Starbuck, Dominic Fortune, etc.). It was early enough that his table wasn’t swamped. We got to chat for a bit about comics, a mutual friend of ours that he went to school with; and we talked a little about MOSES MILITIA which he liked the concept of and the art. Gave him a postcard of the cover.

Leaving Baltimore was a headache. I had purchased discounted garage parking online where I had a printout of a barcode to scan for entry and exit. Well the parking garage scanner wasn’t working. Your humble narrator had to sit at the exit on a steep downwards angle for 45 minutes while I telephoned customer service who tried to get someone to drive to the garage to let me out. Now I’m not the type to get angry at someone who has nothing to do with the problem so I passed time calming the phone clerk down. When I got home I did receive a credit from the company bringing my total cost of parking to $10 for the entire weekend. Yay me!

After three days of munching on crackers and granola bars, I decided to treat myself to a dinner of comfort food which meant finding a buffet. Well, there weren’t any along the way but what New Jersey lacks in a pleasant fragrance they make up for it with quality diners. Not this time. I found a place in the middle of nowhere next to one of those cliché chemical or power plants that you see along the Turnpike. The ambulance pulling away from the parking lot should’ve been a warning sign but it was late and I was starving. There was a bunch of weirdness that belonged in a Netflix horror show but I ignored them – like being the only male in the place at a diner with a mostly full parking lot and all the women customers seemingly there for Sunday evening’s all-you-can-eat chicken pot pie dinners. Now I’m wondering about the gender of the person carted away in the ambulance. Hmm….

No, I didn’t get the pot pie. I had truly awful chicken scampi on overcooked spaghetti. Great coffee though. 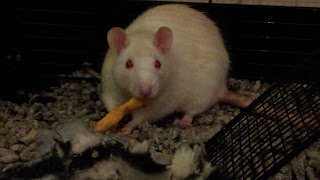 Thus passed my latest adventure at Baltimore Comic Con. Morty the rat is happy to see me & glad to finally get some Chinese noodle treats!