My living room is littered with boxes of comics, prints strewn on the floor, spilled postcards, and bags of candy. Another Baltimore Comic Con has come and gone!

This past summer has been a constant battle to defeat a nightmare of a deadline - finishing production of MOSES MILITIA #4, my World War 2 comic book series about a team of Jewish soldiers battling Nazi paranormal schemes. Each time artist Bill Wylie has turned in pages, I've been astonished at seeing the script springing to life...and then I'd look at the calendar and freak out.

For those unfamiliar with how the donuts get made, this is the comic book process - the writer writes the script, the artist turns it into art (pencils & inks), the colorist does his thing, ditto the letterer, and then the finished book (including ads & a back cover) goes to the printer who needs a week minimum (my guy anyway) to bring you a finished stapled book. While all this is going on, you need to be aware of your deadline. For me it was September 20th - the day before I was driving down to Baltimore for Comic Con. 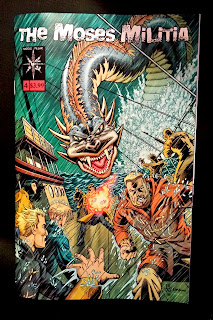 In my attempt to learn as much of the production as I could, it was my intention to color and letter the entire book but as my deadline crept up it was obvious that I needed help. Luckily I was able to get the amazing Dave Sharpe to letter the book while getting a last minute hand from the incredible Chris Sotomayor to color the last two pages of MM4. Both of them teach their respective fields online through Comics Experience (which I recommend highly - http://www.comicsexperience.com).

So the donuts got made & I couldn't be happier. MOSES MILITIA #4 looks fantastic and could sit side by side with any book on LCS shelves. It kicks off the new story arc where the team has to deal with Nazis discovering Skull Island - yes, that one where giant apes come from. Bear in mind I wrote this in 2010. No plagiarism here, kids!


In Baltimore I started off with a surprise in my hotel dresser - a full, one piece pants suit. Somebody had a party. Then it was off to get some local fried chicken & fries right next door to a local sex shop advertising "We have Fleshlights!" Chicken is good enough for me, thank you.

The first day of the Con started great. I have a corner table close to the entrance of Artist Alley & a nice neighbor (Visionary Comics). It can be a nightmare if the table next to you is....less than friendly but Mike & his family were a delight. We covered each other's tables for breaks & they ran coffee runs! Woo-hoo! 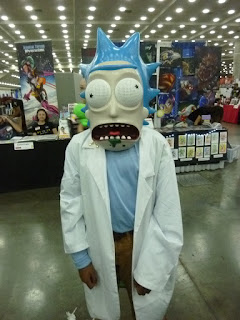 Ran into Mike from Vampire Robots (http://www.thevampirerobots.com/) and placed an order for Godzilla stuff because I can never have enough!!

The second day was packed. Lots of people but not too many sales. That was the general consensus of the vendors I spoke to. The reasons were speculative but one could be that the loss of the Harvey Awards caused a drop in professionals attending the Con. Who knows?

Unfortunately I was unable to go to any of the panels this year because I didn't have a helper to cover the table. That was a big snag but I was able to realize a personal dream. TOMB OF DRACULA #52 was the first Marvel comic I bought back in 1977. I still have that book which Gene Colan (the penciller) had signed when I first met him in 1991. Now I have signatures from Tom Palmer (the inker) and Marv Wolfman (the writer). Both of them were moved by my enjoyment of their work & explaining how that issue made me seek out the entire run. TOMB is still my all time favorite comic series. 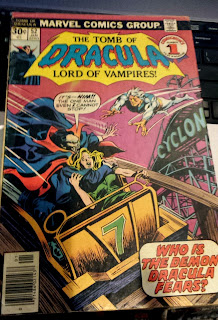 Marv also said that he recognized me though he didn't know from  where. Besides Facebook (we're friends) I couldn't say but he did ask about my book and said, "Any book against the Nazi horde sounds good to me!" And now he has a copy of MOSES MILITIA #4 as a gift!

That evening everyone gathered at the Hyatt Regency (site of the new RINGO Awards) for drinks. It was nice to run into Tom Palmer once again, Sean Van Gorman (artist/writer), and Amy Chu (writer). I also ran into fellow indie comics creators that I had met from last year and we had a nice discussion about comics and comedians over many a round! Everybody loves Kyle Kinane!

The third day started off with an annoying false fire alarm that kept everyone outside for half an hour in the blazing sun. Ugh! But once the fire department gave the OK we were back in business.

The day ended with a very pleasant chat with colorist pro Laura Martin who had given me some great advice at last year's con. As she looked through the pages of MOSES MILITIA #4 she was pleased that I took that advice to heart and gave me some very nice compliments on my work. I think I floated back to my table. Thanks Laura!

So in summery, I'm very pleased with the comments from fans, buyers, and professionals on MOSES MILITIA. Sales may have been down but Baltimore Comic Con is always a pleasant experience and I will vend there again. Hopefully with the next issues of MM in hand.